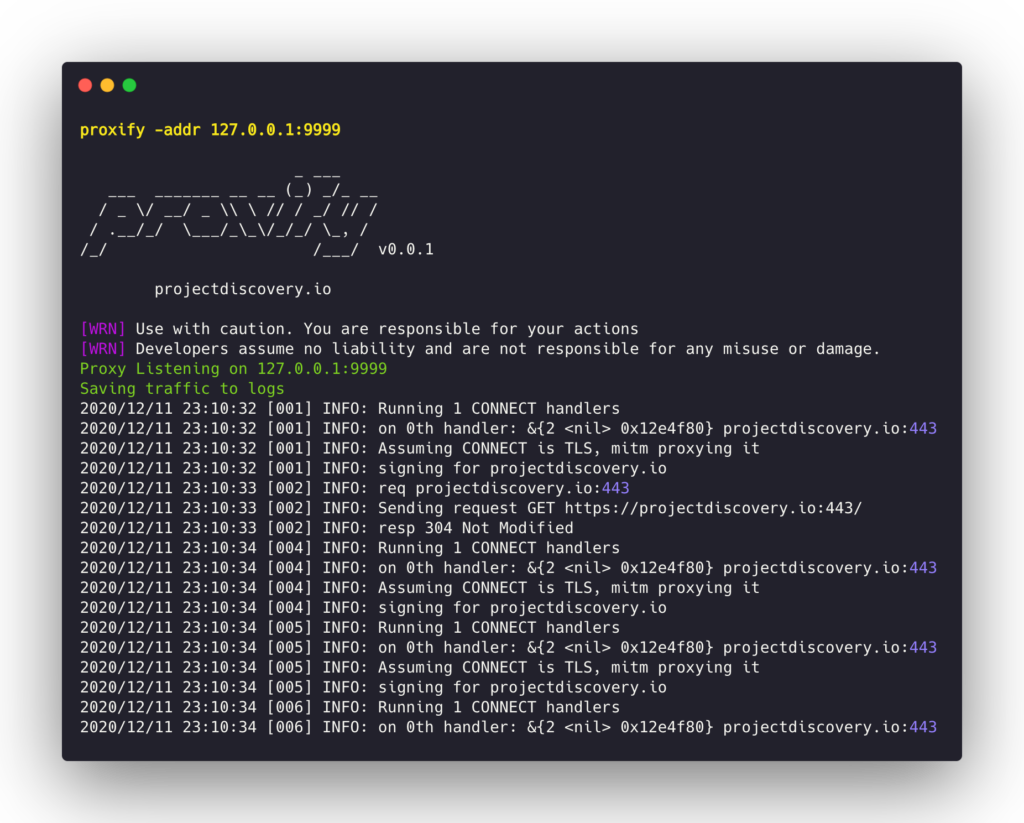 Swiss Army Knife Proxy for rapid deployments. Supports multiple operations such as request/response dump, filtering and manipulation via DSL language, upstream HTTP/Socks5 proxy. Additionally a replay utility allows to import the dumped traffic (request/responses with correct domain name) into burp or any other proxy by simply setting the upstream proxy to proxify.

The installation is easy. You can download the pre-built binaries for your platform from the Releases page. Extract them using tar, move it to your $PATHand you’re ready to go.

proxify requires go1.14+ to install successfully. Run the following command to get the repo –

This will display help for the tool. Here are all the switches it supports.

Dump all the HTTP/HTTPS traffic

Dump all the traffic into separate files with request followed by the response, as default proxify listen to http://127.0.0.0:8080. Custom address and port can be defined using addr flag.

As default, proxied request/resposed are stored in the logs folder.

This feature is used for example by the replay utility to hijack the connections and simulate responses. It may be useful during internal assessments with private dns servers. Using * as domain name matches all dns requests.

Match/Filter traffic with with DSL language.

If the request or response match the filters the dump is tagged with .match.txt suffix:

Match and Replace on the fly

Proxify supports modifying Request and Responses on the fly with DSL language.

Replay all traffic into burp

Replay all the dumped requests/responses into the destination URL (http://127.0.0.1:8080) if not specified. For this to work it’s necessary to configure burp to use proxify as upstream proxy, as it will take care to hijack the dns resolutions and simulate the remote server with the dumped request. This allows to have in the burp history exactly all requests/responses as if they were originally sent through it, allowing for example to perform a remote interception on cloud, and merge all results locally within burp.

A certificate authority is generated for proxify which is stored in the folder ~/.config/proxify/ as default, manually can be specified by -config flag. The generated certificate can be imported by visiting http://proxify/cacert.crt in a browser connected to proxify.

Installation steps for the Root Certificate is similar to other proxy tools which includes adding the cert to system trusted root store.

Proxify can be used for multiple places, here are some common example where Proxify comes handy:- Storing all the burp proxy history logs locally. Store all your browse histroy locally. Store all the response of while you fuzz as per you config at run time.

Proxify is made with

by the projectdiscovery team. Community contributions have made the project what it is. See the Thanks.md file for more details.