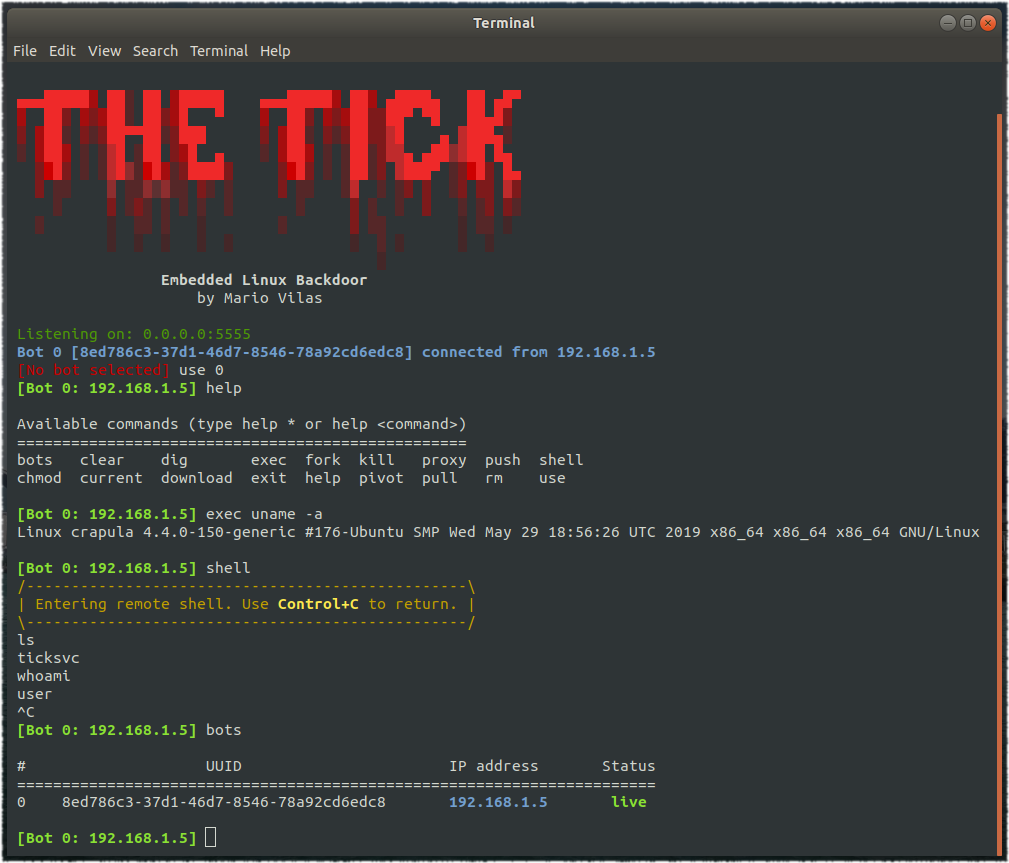 As with any backdoor type tool, there are two components – the bot that is run on the machine you want to control, and a command and control console where the backdoor connects to.

The bot is called ticksvc and you may find pre-built binaries for many platforms in the Releases section. However, if you want to run ticksvc on a platform that we currently don’t have a pre-built binary for, you’ll need to compile it yourself (see the section below). Currently supported platforms are:

Specific install instructions for the bot will depend heavily on the target platform, and are therefore not documented here.

The command and control console is written in Python 2.x and requires no installation, but may have unresolved dependencies. Run the following command to ensure all dependencies are properly installed (note this does not need sudo):

Usually you’ll want to run this console on a server, where you have a public IP address that the bots can connect to. But you can still run this from your desktop if you wish. In most Linux desktop environments the following Tick.desktop file will create an icon you can double click to run the console:

The exact location for the Tick.desktop file may vary across Linux distributions but generally placing it in the desktop should work. Make sure to edit the path to wherever you downloaded The Tick (/opt/thetick in the above example).

To run the bot on the target platform, set the control server hostname and port as command line options. For example:

At the control server, you may want to run the console inside a GNU screen instance or similar:

That way you can detach from the console by pressing Control+A followed by D. You can return to the console later like this:

The console will let you know when a new bot connects to it. Use the bots command to show the currently connected bots, and the use command will select a bot to work with. The help command shows the user manual.

Here are a few screenshots illustrating what the console is capable of:

Download the source code with the following command, to automatically get the built-in dependencies as git submodules:

The Tick has no external dependencies beyond the libc. To compile for debugging purposes, just run the makefile:

Once the make command has run to completion, the compiled binary can be found at the bin folder. By default this binary will have logging enabled and debug symbols.

To cross-compile for multiple platforms, you will need Docker installed and configured. Then, just run the build.sh script to build everything in one go:

You can also filter by architecture: